Rabies is a zoonotic disease (a disease that is transmitted to humans from animals) that is caused by a virus. The disease affects domestic and wild animals, and is spread to people through close contact with infectious material, usually saliva, via bites or scratches. Rabies is present on all continents with the exception of Antarctica, but more than 95% of human deaths occur in Asia and Africa. Once symptoms of the disease develop, rabies is nearly always fatal.

Rabies is a neglected disease of poor and vulnerable populations whose deaths are rarely reported. It occurs mainly in remote rural communities where measures to prevent dog to human transmission have not been implemented. Under-reporting of rabies also prevents mobilization of resources from the international community for the elimination of human dog-mediated rabies.

Rabies is a vaccine-preventable viral disease which occurs in more than 150 countries and territories. Infection causes tens of thousands of deaths every year, mostly in Asia and Africa. 40% of people who are bitten by suspect rabid animals are children under 15 years of age. Dogs are the source of the vast majority of human rabies deaths. Immediate wound cleansing and immunization within a few hours after contact with a suspect rabid animal can prevent the onset of rabies and death. Every year, more than 15 million people worldwide receive a post-exposure vaccination to prevent the disease – this is estimated to prevent hundreds of thousands of rabies deaths annually.

Literature research reveals rabies occurrences in Taiwan as early as in Japanese ruling period (1895-1945) and at least 11 cases in north and south of the island since 1900. Shortly after World War II, Rabies was introduced to Taiwan from China in 1947. There were epidemics occurred continually after the first human rabies case found at Taipei city in 1948, regard 238 cases in 1951and 102 cases in 1952 as most. Though dog vaccination countrywide, put out stray dogs and the quarantine of dog imported, controlled the epidemic effectively, no more human case appeared since 1959. Only one case each was reported from China in 2002 and 2012, and one from the Philippines in 2013. Animal's epidemic situation, Taiwan had not occurred animal's case since 1961, till July 16, 2013, Council of Agriculture’s Animal Health Research Institute reported to World Organization for Animal Health (OIE) on July 17 that the wild ferret-badger was contagious with the rabies virus. 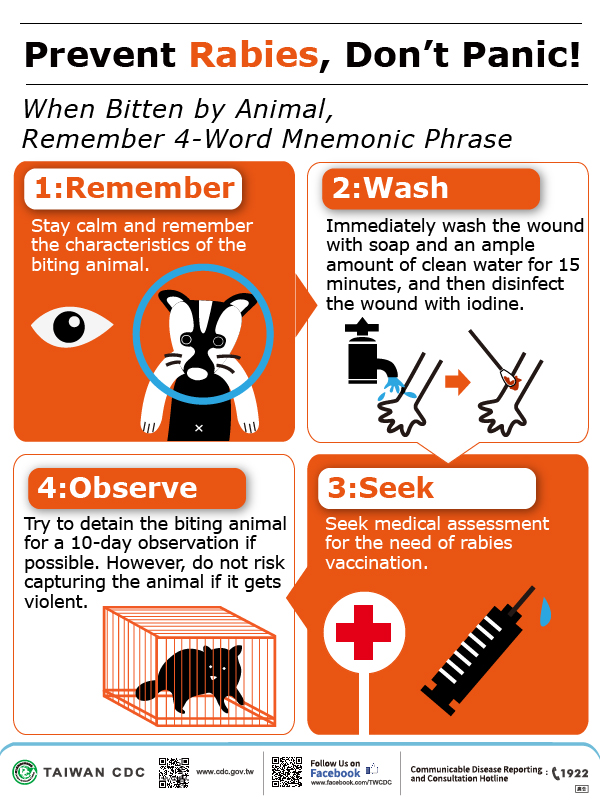