The parasite exists in two forms, a cyst stage (the infective form) and a trophozoite stage (the form that causes invasive disease). Cysts are typically found in formed stool, whereas trophozoites are typically found in diarrheal stool. Both of them are passed in feces. Infection occurs by ingestion of mature cysts in fecally contaminated food, water, or hands. The incubation period may ranges from a few days to several months or years, commonly 2-4 weeks. Transmission can also occur through exposure to fecal matter during sexual contact (in which case not only cysts, but also trophozoites could prove infective). The cysts can survive days to weeks in the external environment and are responsible for transmission. Humans usually a chronically ill or asymptomatic cyst passer. Trophozoites passed in the stool are rapidly destroyed once outside the body, and if ingested would not survive exposure to the gastric environment. In many cases, the trophozoites remain confined to the intestinal lumen of individuals who are asymptomatic carriers, but in some patients the trophozoites invade the intestinal mucosa, or, through the bloodstream, extraintestinal sites such as the liver, brain, and lungs, with resultant pathologic manifestations.

Most infections are asymptomatic. Only about 10% to 20% of people who are infected with E. histolytica become sick from the infection. Factors that influence whether infection leads to asymptomatic or invasive disease include the E. histolytica strain and host factors such as genetic susceptibility, age, and immune status. Clinical amebiasis generally has a subacute onset, symptoms are often quite mild, range from mild diarrhea to severe dysentery, producing abdominal pain, fever, diarrhea, and bloody stools, to fulminant amebic colitis. Rarely, E. histolytica invades the liver and forms an abscess. In a small number of instances, it has been shown to spread to other parts of the body, such as the lungs or brain, but this is very uncommon.

Epidemiology
Amebiasis is ubiquitous worldwide. People of all ages are susceptible. Females and males are equally like to be infected, but invasive diseases is more common in males. Asymptomatic carriers are common in endemic areas. The prevalence is disproportionately increased in developing countries because of poor socioeconomic conditions and sanitation levels. In developed countries, amebiasis is generally seen in migrants from and travelers to endemic areas. However, E. histolytica is much more prevalent among male homosexuals in some countries. Invasive, extraintestinal amebiasis (e.g., hepatic abscesses) are more frequent in HIV-infected patients in these countries.

Amebiasis is one of the Category 2 communicable diseases in Taiwan, and all cases should be reported to health departments. In a decade ago, many outbreaks took place in long-term care facilities. After leading health education programs to facility staff and residents screening plan before admission to a long term care facility, the outbreaks decreased significantly. However, E. histolytica is much more prevalent among male homosexuals in Taiwan. On the other hand, importing foreign workers from Southeast Asia has led to an increase in imported cases in Taiwan. 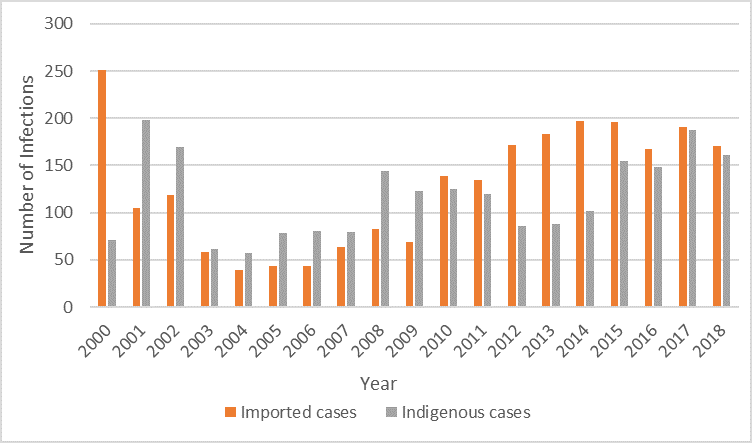 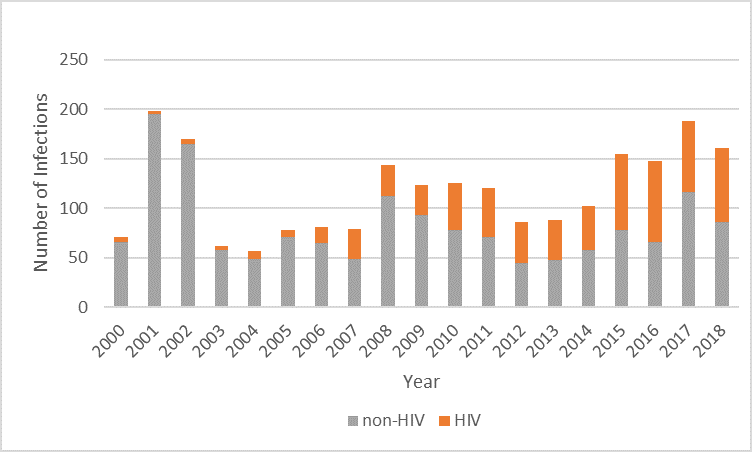